​Against Many Odds, Ring-necked Pheasants Strive to Thrive in Vermont
(2012)
One Lonely Boy Looks for Love Among the Locals
I had a rare chance to observe close-up the survival struggles of some local wild pheasants and photograph one male's bumbling attempts to woo a female.

​
The Puzzle of Cousin Jack Jaffin
Did Franklin Roosevelt ask him to bird-dog a pair of Nazi sympathizers? Or was he just inclined to hang out with them?  Or, both?

Heartbeats of the City
The short, lost history of an early breakthrough in coronary telemedicine, and an account of the wider work that meant much more to the inventor than any credit for his invention. (A researched family story with wider historical significance.)
(June 2019)

All Creatures Oddly Bright and Beautiful
2019, and Continuing)
This page provides some on-going content spooling out from my published story about the a white-headed cardinal, a local white bear legend, and the tendency of humans to place value on rarely-white creatures.  And now there are new twists to ponder in the case of this same bird and the legendary white bear of the story.

Schmoozing with Schwartzenegger, and Other Behind the Scenes Photo Session  Anecdotes
(2011)
TIme was, when someone in the (Vermont) governor's office wanted an in-house photographer to record an in-house event for posterity, I would be dispatched. Or, it might be a ceremonious public event they wished to publicize, but not one you could count on the regular press corps to cover.
Sometimes, funny things happened.

​​The Mother of All Maples: An impressive Find in an Old Family Grove
A 5-minute photo-documentary

​ (​2011)
Dave Strong of Plainfield, Vermont, asked me to photo-document some of the year-round work that goes on at his family's sugarmaking operation in Orange. As we left the sugarwoods, the "mother tree of the grove" came into view on an nearby ridge. Dave was habituated to its massiveness, but I was not. My amazement amused him. Eventually, though, he called in a state forester to try to settle the matter of how this still-living maple compared to Vermont's record-holding giant trees. The result afforded the Strong family some bragging rights.

Rock, Gravity, Friction:  ​
Statements in Stonework
(This piece is under reconstruction.)
One day I plan to have a bumper sticker made that says: I BRAKE FOR STONE WALLS. Let the person driving behind me think about that one. Living in Vermont you see a lot of stone walls from lumpy utilitarian heaps to masterworks of design. Few woman tackle such art. Thea Alvin is a mind-boggling master. 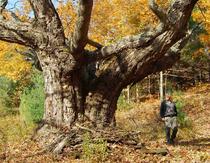 A BLOG, BARELY:  STORIES WRITTEN NOW AND THEN FOR THIS SITE
​Plus, other intriguing content.  See also: PUBLISHED ARTICLES