All Creatures Oddly Bright and Beautiful

Link to Article:  All Creatures (Oddly) Bright and Beautiful
Published April 2019 by Press Pubs (Minnesota) White Bear Lake/Vadnais Heights
Synopsis: ​A visit from a white-headed cardinal  -- a genetic oddity -- spurred questions about the varied ways in which humans attach importance to wild animals with rare white color mutations, including the white bear of White Bear Lake legend, from which the town takes its name.

Two years after I first saw it, the white-headed cardinal -- one of the rare animals featured -  is still around. And now there are new twists to ponder in the case of this same bird and the legendary white bear of the story.

IF YOU'RE VIEWING THIS PAGE ON A MOBILE PHONE, CHOOSE DESKTOP VIEW FOR EASIER READING

Here are a few more pix I've since taken of the photo-shy white-headed female Northern Cardinal and her presumed Significant Other, since the article above ran.
​

​
All photos above by Ricka McNaughton. These are low resolution images for the web. If interested in higher resolution versions for non-profit use, contact me. I'm happy to share.
​
Breaking Down the White Bear Legend: Myth or Mutation?
​The published story above included a bit of speculation about the nature of the famous white bear of local Dakota-Ojibway legend and what it may actually have been. To recap: The lovely town and lake of White Bear Lake, Minnesota, both take their names from a legend traced back to the early 1800's, ranging from Indian legend keepers to the translations of early white settlers in Minnesota. Mark Twain also later penned a version of the legend that veers colorfully from other local historical accounts.

The white bear legend seems much like some of the beautiful striated rocks you find in and around Minnesota rivers. Each stone has the imprint of many forces of nature over time. Every layer holds a true origin story.  But the rock isn't any one thing. And it has many burnishers.

The hero throughout the legend's variations is an Indian brave who, for the approval of a woman, her father, and/or in the cause of renewing peace between warring tribal factions, engages in a deadly battle with a ferocious white bear whose domain is an island in White Bear Lake.

These are questions that intrigued me, so I reached out for some expert help:

Was White Bear Lake's legendary white bear a real beast of yore? If so, how far back did "yore" go? Given that Minnesota has had no known polar bear population this side of the last age age, was the white bear a color mutation of a native black bear?  Or was it a bear not born of this earth but, rather, an important spiritual figure to the Dakota which could take a number of forms? Or...Over generations, did the story become a braiding of flesh and spirit?

The Biological Possibilities: If the white bear was based on an actual local animal, there are a couple of rare genetic mutations possible for Minnesota, per bear biologists I spoke to for the states of Minnesota and Montana. Why was I talking to Montana? Because Minnesota officials -- though extremely helpful otherwise -- had no documented photo examples to offer, and Montana did.

​
​​The rare albino black bear was one possible candidate for the legend.
An albino black bear is a black bear with a white-appearing fur mutation, most easily distinguished by the lack of pigment showing in the eyes and nose areas, which makes those features appear pink. Albino black bears typically have poor eyesight, less resistance to the elements and shorter life spans. Nine years ago, such a bear had "gotten into some trouble" in a Montana town. (Photos below.)  This usually means a  bear had become too comfortable foraging in an area claimed by humans. It was lured into a specially-designed transport container and re-homed in a national park. I'm grateful to Montana's Department of Fish, Wildlife & Parks for running down the info and photos.

​Above: an albino black bear in Montana '"getting into trouble in town." Photo source: Derek Reich/Montana Department of Fish, Wildlife & Parks.

​
​​Another candidate ifor the source of the legend is the unusual white-phased black bear,  which, notably, is not an albino.
​It's born with white or creamy-"blonde" fur, which in maturity turns dark. Its eyes and nose have normal pigment. In 1997 a cream-colored bear soon to be named "Halo" wandered into the Vince Shute Wildlife Sanctuary near Orr, Minnesota. He became a beloved (and much commercialized) figure for a time but disappeared roughly a year later. According to the website americanbear.org, Halo was thought to be a genetically determined white-phase black bear. Rumors abound as to his fate. But after his disappearance, the State of Minnesota passed a law preventing the hunting of any white-phased black bears.

A sub-group of the white-phased black bear -- called the Kermode bear - exists on a few isolated islands off the coast of British Columbia. Indigenous populations there regard them as sacred animals. Roughly one in three cubs is born creamy white. Is it possible that a buried bit of Kermode DNA expressed itself in Halo? Or in the bear of the White Bear Lake legend?

There is yet another possibility for a "white" bear sighting as the basis for the Indian legend. It may have come down to a misinterpretation of an Indian word for "light colored" which a careless or confused translator set down as white. Though grizzly bears are no longer found in Minnesota, they were still around as recently as the 1800's. Grizzlies come in an array of colors, including light brown.

I've noticed that commercial signage around White Bear Lake tends to favor a polar-bear-like physique, possibly because the polar bear is the most recognizable depiction of a white bear.

Interested in another unusual bird story?
See: Love on the Front Lawn

Against many odds, non-native ring-neck pheasants have struggled to make a stand in Vermont.  This love-lorn character (below) gave me an unexpectedly close look at his boisterous and comical mating habits. 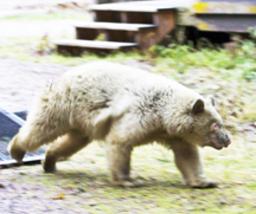 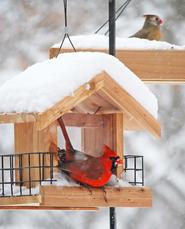 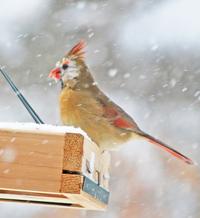 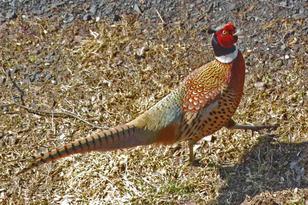 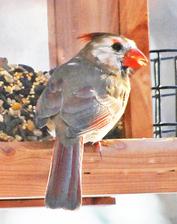 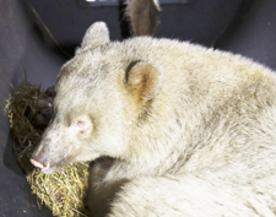