Schmoozing with Schwartzenneger,
and Other "This Actually Happened " Stories
A Humorous Look Back at Some
Behind-the Scenes Photo Shoots
​
While working in various public communications roles in Vermont state government, I became someone the governor's office staff or other state agency officials would call upon from time to time to photograph special in-house events to which the press was not invited, or, sometimes, to photograph ceremonies and the like that the regular press would find too trifling to cover. Sometimes the events themselves were interesting. Sometimes the job of chronicling some of these events produced made for some interesting stories of their own  I've gathered a  few of them together here.  Some of the shots never saw publication before now. (But in  every case either I received permission to use them or there was an understanding at the time I took them that the photos were meant for public use.) Let's begin: 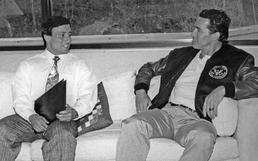 Below: Governor' Kunin's staff defacing state property (days before the walls were demolished.) 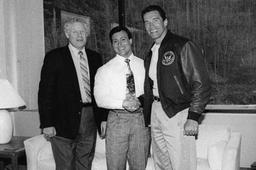 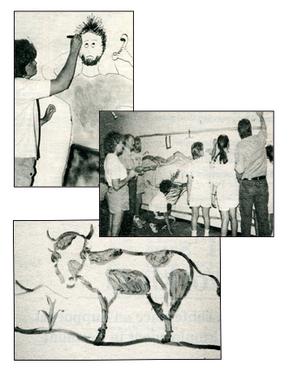 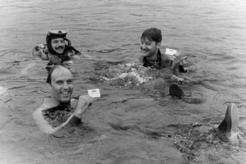 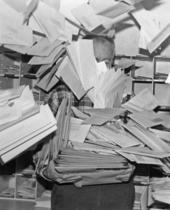 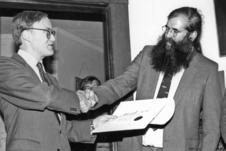 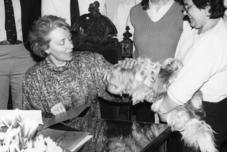 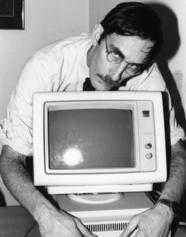 All photographs this page
​by Ricka McNaughton

A couple of decades ago actor/politician Arnold Schwartzeneggar came to Montpelier, Vermont, to call upon fellow Republican party strategist and then-Governor Richard Snelling. Alerted to Arnold's plans, I had asked Snelling's press secretary if the Governor might be kind enough to squeeze in a personal meeting for a devoted fan of Arnold's whom we both knew. That fan was Ray Bessette, a state telecommunications staffer. As then-editor of Vermont News & Views, I had an office tucked away in a corner of the same building as staff of the the State telecommunications office, a block from the Governor's office. There weren't many employees housed there -  it was an old house --essentially, so we were fairly chatty with one another. On Ray's office wall there was a poster of a young Arnold Schwartzeneggar striking a Mr. Universe pose -- tanned, oiled and mega-muscled. Young Ray was himself a titled competitive body-builder, and said that this was the reason for his hero worship of Arnold. OK.

Ray stressed that he himself was committed to what he called natural body building. That is, non drug-enhanced body building. Ray would sometimes parade his latest healthy superfood concoction around the office. He liked to snatch our unhealthy donuts away and tried to sell us on his famously off-putting "tuna fish smoothie" protein lunchtime drink.
​In his fourth and last term as Governor at the time, Richard Snelling, was a highly successful and self-made businessman, known as a no-nonsense taskmaster. You could feel a different charge in the air when he walked into a meeting room. He was not a man to tolerate fools or mistakes. If you claimed a minute of his time you'd best use it well.  And yet, he was wonderfully accommodating of this bit of foolishness I had proposed. Snelling agreed to help orchestrate Ray's introduction to his hero Arnold as a complete surprise. We set up a bogus meeting in the Governor' office - a so-called telecommunications strategy session.  I told Ray there was going to be an announcement of some kind so I would attend the meeting with him.

At the appointed hour, as Ray and I were waiting in the Governor's outer offices, Arnold and his two-man entourage/security detail walked in.  And Ray nearly came out of his skin.  Much more lithe than he once was, Arnold moved in a sinuous, self-assured way across a room - tawny and puma-like. Often, celebrities lose some of their on-screen wattage off camera.  But Arnold seemed to have lost nothing more than some excessive musculature in recent years. Wherever you stood with regard to his acting or politics, you had to give him this: He exuded as much or more star quality in person than on the screen.  He and his team were admitted to the inner gubernatorial sanctum, and shortly after, so were Ray and I.

Snelling had arranged for Ray to have ten minutes or so of idol-worshipping heaven with Arnold, accompanied by me to record it.  Arnold and Ray were seated together on the Governor's VIP couch. (See pic at left.)  I overheard them amiably discussing the merits of Ray's tuna fish smoothies.   The Governor wanted in on a handshake shot, and just as the three of them lined up, my expensive, fully-charged flash unit Ihat I dutifully charged and checked before every shoot suddenly faltered.  On and on it whined, slowly, interminably, struggling to gather juice for each burst of light. I nonetheless pressed on to get several shots in this time-consuming way, keeping everyone waiting. Arnold grew snappish. There was no outside press in the room. I was it.

"You snuce you luce!" Arnold chastised me in Arnold-speak.  Perhaps he could have used a tuna smoothie.

Staff Graffiti Graces the Governor's Corridor
When I took the shots at left , Governor Madeleine Kunin's aides and staffers in adjoining offices had packed up in preparation for a move from the fourth floor of the Pavilion Office Building to the newly renovated fifth floor.  They were leaving behind long expanses of bare, white sheetrocked office walls in corridors that previously doubled as a public fine arts exhibit space. Those walls were soon to be torn down.  And so, the vacating staffers decided to produce a final exhibit of their own.

They changed out of their power suits, grabbed cans of spray paint and covered the walls with bold images and impromptu murals. Stylistically, I'd put the work somewhere between the folk art of Woody Jackson and the prehistoric cave paintings at Lascaux. It was art never meant for the ages. Just something to mark, for a day or two, the passing of the Governor's old 'hood.

3. Pushing the Paws Button​​
​​At a ceremonial gathering, top left, Governor Madeleine Kunin was presented a new prototype cuddly State Police teddy bear, in approximate uniform.  The toy had just been produced in quantities for Vermont's troopers to carry in their cruisers in order to have something comforting to offer a child in crisis or facing a stressful situation. Nice idea.  At the press podium, Governor Kunin is noticing that this bear, now a working member of the force, has not been issued pants. This concerns her. Was it a budget thing?  It looks as though Commander Robert Horton's bullet points for the press conference did not anticipate this question.  He treated it as an active investigation and withheld comment.

Below that, Governor Kunin begins a ceremonial bill signing in her office with the usual phalanx of stakeholders. The dog was not expressly a stakeholder.  But Kunin had a gift for ​making ​everyone in the room feel important.

​​​4. Hair Apparent
By the time "Gentleman Jim" Douglas (left in the photo) became Governor of Vermont, he had much less hair than he did in this shot taken when he was Secretary of State. A lot of people might look at this shot and think: Wow. Look at that. Jim had hair!  What he's doing here is presenting an award to then-State Archivist Gregory Sanford (one of many Gregory would receive for his work preserving state documents and crafting enlightened public records policy.)  By contrast, Gregory's abundance of facial hair is, if anything, even more impressive today.   ​

When the state's first electronic legislative bill tracking system came online, they called it LEG.BILL. Clumsy as the first version was compared to today's, it was still a splendid innovation. But in large human organizations, change is never without its fearful doubters and ornery resisters.  A good many people must be persuaded to embrace progress.
As editor of an in-house government publication, I needed a cover shot for a story about LEG.BILL. I wondered if then-legislator Bill Mares might pose. He seemed possessed of the right spirit.  Rep. Bill was/is also an author, teacher, and commentator. Along with political science writer/professor Frank Bryan, Bill had co-authored the hilariously droll book, "Real Vermonters Don't Milk Goats."  He had name recognition and I thought he could bring some brio to the task of posing for the LEG.BILL story. He certainly did.  At left is an outtake of Bill hamming for the piece, "embracing" the new technology.  Just recently I discovered another interesting facet of Bill Mares' past.  See related item on my Blurbosphere.
​

​4. Taking the Plunge
When shooting groups of people for government or  organizational uses, it's hard to get them to do something interesting. But now and then something wonderfully offbeat can occur. Here are a couple of instances.

Members of the State Police dive team had recently completely a rigorous new training and certification process.  I was instructed to show up at a dock on Lake Champlain, where I was put in a boat and motored off to the area where the graduation would occur:  In the middle of the lake, in a gathering rainstorm.  There they did their final exercises and received the plastic-clad certifications underwater. When they emerged brandishing their "diplomas" it made for a refreshingly unusual shot.  A resulting story (republished) can be found here.

5. Going Postal  - This Actually Happened
I was once assigned to write about impending changes to the state's postal system operations in an attention-getting way, so that postal customers wouldn't be caught unaware. I was bent on finding some catchy approach to this.  When the state postmaster described to me "the twice-daily tornado," in his words, of mail that came through the central facility, I asked him jokingly, Could we actually make a tornado of mail for me to photograph?  "Well, hmm, OK," he replied.  So,  yes, this happened: We made a mail tornado.

At left is the postmaster behind the improvised whirlwind. It took many tries to get one with his face even partly peaking through. Afterward I helped him pick up and reorganize every piece of mail.  We probably broke some federal law or other, but I presume the statute of limitations has run out. Just to be safe I won't reveal who the postmaster was.