Visiting wild turkeys may have advertised this spot as a good family eatery.

LOVE ON THE FRONT LAWN
Against the Odds, Very Small Numbers of
Ring-necked Pheasants Strive to Thrive in Vermont
(Ricka McNaughton  May 2011)

Those, I imagine, are the approximate thoughts of a wild male ring-necked pheasant I've come to know well this spring. For the past month or so he's been wantonly advertising for a mate beneath our front yard feeder where a motley mix of wild birds and free-ranging domestic fowl from around the neighborhood gather. Now this male pheasant and a couple of females -- not native to these parts -- have fallen in with them.  The male's customary habit of extreme wariness has given way to a case of blinding, bird-brained desire. No derision intended. And he's open to all mating possibilities. He had, for a while, an abiding interest in turkeys, in particular a neighbor's Broad Breasted White female who regularly wandered down the hill for feeder drops.

Against steep odds, unknown numbers of ring-neck pheasants have been making a living in and around our rural Vermont hillside the past few years. They are non-natives who do better in the windy plains of of the midwest, where they rely on bare patches of ground in winter to scratch for seeds and roots. Vermont is tough on them. Some ring-necks in Vermont have escaped from or released by breeders now and then to be hunted down as game birds. Those that survive seem to follow the foraging habits of the area's wild turkeys.

​This spring the courting male pheasant is a frequent and loudly audible visitor to the feeder area. His love calls are unmistakable, beginning with a thunderous beating of wings followed by two piercing squawks that sometimes sound, fittingly, like "rut, rut." He is, on one hand, a noble and exotically dressed prince for these parts, decked out in shades of ruby red, shimmering copper, blue-green and white. On the other hand, his courtships bring an air of goofiness to the process.

In a typical display, the pheasant inflates his chest to cartoonish proportions, slowly turning to show his flashy head and tail gear -- a Mr.Universe dressed by Lady Gaga's stylist. Sometimes he'll perform a lordly back-and-forth strut. When he takes a courting break, which isn't often, he'll make a running lift-off, and do a low glide down to the broad sheltering skirts of a large pine in the tree line below the house. When restored, he'll follow the line back up, rock-hopping his way along an old stone wall.

Since I came to understand the pheasants' low odds of winter survival in Vermont, I began leaving rations of recommended food close to their roosting places, and they came for it. I didn't want to cultivate a dependence.  I just wanted to help nourish these non-native underdogs through a rough winter.  Come spring I was loathe to withdraw the special food despite well-publicized warnings from the Vermont Fish & Wildlife Department to halt all wild bird feeding that time of year. The intent is to protect homeowners from dangerous visits by opportunistic bears awakening from hibernation, and to spare the bears any resulting persecution. I am having a wandering reflection about this:

What comes to mind is an image of a large, uniformed Vermont Game Warden (they tend to run big in Vermont), his arms crossed, his legs slightly akimbo. He has the weary, tight-eyed look of someone who is paid to suffer fools on a regular basis.  But, wait.  He now seems faintly amused, too. I now imagine that he's recalling a nearby Montpelier (capitol of Vermont) resident who recently ignored the official spring call to take stop leaving seed out.  One night this man heard noise in the backyard and discovered a pair of black bears ransacking his birdfeeders.  Without a stitch of clothing on he ran across his yard to chase the marauders off. One of them turned and chased him back to the house. The man made a narrow escape. I'm not making this part up.

The star of that drama, as some may recall, was the governor of our fine state. I'm not seeking to embarrass. The Gov Himself broke this story to the media. It did not play in the news to his advantage. At a time like that, no one remembers your better moments.

I decided to take my chances with spring bears.  Food was till scarce and the birds faced many threats here on the hill. Hawks. Fox. Coyotes. Evidently, too, they have no fear or understanding of cars. Early one morning I spotted yet another dead pheasant by the side of the road. This made three I'd seen since they first arrived. This one was a female.  No predator had gotten to her yet. I pulled the car over and gently picked her up, absent any plan beyond that.

The body felt like a hank of spun silk in my bare hands. Unlike the showy males, female plumage is made up of neutral tones. At close range I was able to notice the lovely graphic patterning of the taupe, cream and black feathers. It clicked that I'd seen similar motifs in Native American pottery and basketry. I laid the body under a nearby patch of tall brush. Better that she become a scavenger's meal of pheasant-under-grass than a desecrated blob of bird pulp in the road. Better for me, anyway.

We've always had interesting wild things in our open fields. They are no longer grazed by farm animals, and we cut most of them only once a year.  The intermittent tall brush offers an abundance of wild, seedy, pollen-y, wormy goodness to foragers. It's a land of cocoon-silk and honey. Word evidently gets around. One warm, perfumed night last summer the back field was so spangled with fireflies it was stupefyingly beautiful.  Here was nature's own Flashmob, convened not with cellphones, but pheromones.

It was easy to lose your heart to the lovely pheasants. Will they thrive?  Consider that Vermont's re-introduced wild turkeys, once scarce, have successfully proliferated due to a modicum of ingenuity and the ability to live near farms and rural-residential areas.  They have access to manure piles, crop field gleanings and animal feed here and there. Add the trend of milder Vermont winters, throw in a little human-sourced pheasant chow, and who knows what feats of adaptation these beautiful, struggling pheasants may pull off.

Muck around as we humans might, in the end, Nature will decide what is natural.

Epilogue:  We had ringneck pheasants in the area for a couple of years after this writing, right through the winters. One summer a female brought a trio of youngsters to the feeder for a time. A treat.  But after that, no more sightings.  Once in a while, in spring, I thought I heard a male squawking down in the fields.

All  photos and text by Ricka McNaughton.  All rights reserved. 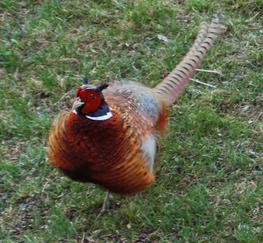 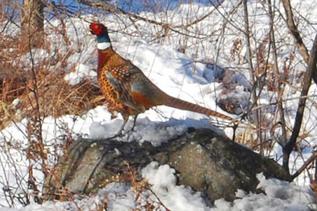 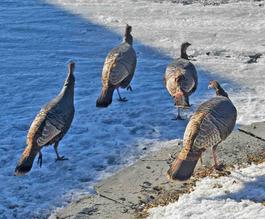 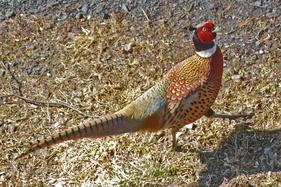 Making it through the winter.